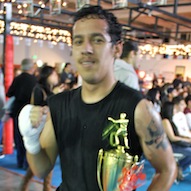 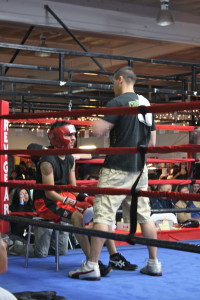 During the first round, Victor probed for openings by controlling the ring and pressuring his opponent, Adam Clignent of Millennia Gym in Rancho Cucamonga. Clingnent kept Victor on his toes by utilizing a fast jab and quick combinations. Clingnent demonstrated his footwork and managed to alleviate some of Victor’s pressure by staying off the ropes. Still, Victor began to find a home for his counter-shots and ended the first round with a blistering left hook.

In the second round, Victor sustained his pressure on Clignent. As Clignent appeared to have a reach advantage, Victor strove to close the distance in order to bring his left hook to bear. As the round progressed, Victor landed some clean right hands and tried to open up on Clignent’s body.

In the third round, Victor’s conditioning and heart paid off. He increased his pressure and activity and forced exchanges. Landing both good left’s and rights, he kept Clignent moving backwards for nearly the entire round. Clignent stayed tough and fought valiantly by matching Victor’s determination.

It’s always good to see guys willing to put their skills to the test. Both guys deserve congratulations on their debuts and for pleasing the crowd with some fantastic action. In the end, Victor won the judges’ decision. Still, our thanks goes out to Adam Clignent, for teaching us a little something about the sweet science, and the guys at Millennia Gym and South Coast Martial Arts – for their parts in making bouts like these possible.


Special Thanks to Pablo & Jose for helping Victor get ready for his bout!

An Intro to Boxing Classes: Top Things to Know
January 6, 2020