A *MUST READ* for Amateur Boxers

The following are the words of Cus D’Amato. Cus D’Amato was a great trainer, a great manager but above all he was a far greater person. He dreamt of becoming a professional prize fighter but at just 12-years-old, he became permanently blind in his left eye as the result of a street fight. Still he remained active in boxing, eventually opening a boxing gym and his home for young and sometimes troubled fighers. 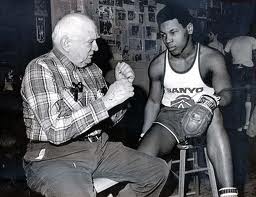 “Boxing is entertainment, so to be successful a fighter must not only win but he must win in an exciting manner. He must throw punches with bad intentions.” (pg. 13)

“There is no such thing as a natural puncher. There is a natural aptitude for punching and that is different. Nobody is born the best. You have to practice and train to become the best.” (pg. 96)

“Fear is the greatest obstacle to learning in any area, but particularly in boxing. For example, boxing is something you learn through repetition. You do it over and over and suddenly you’ve got it. …However, in the course of trying to learn, if you get hit and get hurt, this makes you cautious, and when you’re cautions you can’t repeat it, and when you can’t repeat it, it’s going to delay the learning process… When they… come up to the gym and say I want to be a fighter, the first thing I’d do was talk to them about fear… I would always use… the same example of the deer crossing an open field and upon approaching the clearing suddenly instinct tells him danger is there, and nature begins the survival process, which involves the body releasing adrenalin into the bloodstream, causing the heart to beat faster and enabling the deer to perform extraordinary feats of agility and strength… It enables the deer to get out of range of the danger, helps him escape to the safety of the forest across the clearing… an example in which fear is your friend. The thing a kid in the street fears the most is to be called yellow or chicken, and sometimes a kid will do the most stupid, wild, crazy things just to hide how scared he is. I often tell them that while fear is such an obnoxious thing, and embarrassing thing.. nevertheless it is your friend, because anytime anyone saves your live perhaps a dozen times a day, no matter how obnoxious he is, you’ve got to look upon him as a friend, and this is what fear is… Since nature gave us fear in order to help us survive, we cannot look upon it as an enemy. Just think how many times a day a person would die if he had no fear. He’d walk in front of cars, he’d die a dozen times a day. Fear is a protective mechanism… By talking to fighters about fear I cut the learning time maybe as much as half, sometimes more, depending on the individual.” (pg. 60)

“The next thing I do, I get them in excellent condition… Knowing how the mind is and the tricks it plays on a person and how an individual will always look to avoid a confrontation with something that is intimidating, I remove all possible excuses they’re going to have before they get in there. By getting them in excellent condition, they can’t say when they get tired that they’re not in shape. When they’re in excellent shape I put them into the ring to box for the first time, usually with an experienced fighter who won’t take advantage of them. When the novice throws punches and nothing happens, and his opponent keeps coming at him… the new fighter becomes panicky. When he gets panicky he wants to quit, but he can’t quit because his whole psychology from the time he’s first been in the streets is to condemn a person who’s yellow. So what does he do? He gets tired. This is what happens to fighters in the ring. They get tired. This is what happens to fighters in the ring. They get tired, because they’re getting afraid… Now that he gets tired, people can’t call him yellow. He’s just too “tired” to go on. But let that same fighter strike back wildly with a visible effect on the opponent and suddenly that tired, exhausted guy becomes a tiger… It’s a psychological fatigue, that’s all it is.” (pg. 61)

“I tell them the first time they’re going to fight, the night before they probably won’t sleep. I can’t offer them any consolidation other than the fact that the other guy went through the same thing, and when they get down to the fight and enter the dressing-room, especially if they’re in an amateur fight, the room is full of possible opponents, because they don’t know who they’re going to fight, and everybody looks calm, confident and smiling and all the new boy is aware of is that terrible thump in his chest, and he’s intimidated by their attitude and their confidence. What he doesn’t realize is that they look at him and they see the same thing in him as he sees in them, because by an exercise of discipline he also puts on a superficial appearance of confidence… We go on now into the ring. Half the time they’re walking when they go down to the ring as though they’re going to the gallows. So when they climb those stairs, I never all a fighter yellow. Knowing what he goes through, the very act of climbing into that ring stamps him as a person of courage and discipline.” (pg. 67)

“So now they get into the ring… The other guy probably looks bigger, and stronger and better conditioned and real muscular and when he starts to loosen up he looks more experienced. This is the novice fighter’s mind and imagination exaggerating everything, which is what the mind does. Nothing is ever as bad as the imagination makes it, not even death. A person doesn’t realize what’s making him nervous unless he understands why he’s getting scared, which is the natural, normal thing. When he understands it he accepts it as such. Then it doesn’t become as intimidating, which is the reason why I take the boy step by step until actually the bell rings to fight. I take them that way so that hopefully by the time thy get to fight they’ve experienced these different feelings, which are often intimidating by themselves. ‘[Coach] said it was going to be like this,’so that they don’t feel they are inferior or less prepared than their opponent.” (pg. 67)

“Now, when they go in and face the opponent and the bell rings, for the first time… they’re facing reality, and suddenly a relative calmness comes over them. Relative. They’re still scared but it isn’t that terrible intimidating unknown thing… But the moment the blows start to be thrown, the effort to throw punches has begun, he gets calm, because now this is something he’s been prepared to cope with. …However, I should add that at no time does fear disappear. It’s just as bad in the hundredth fight as it was in the first, except by the time he reaches a hundred fights or long before that he’s developed enough discipline where he can learn to live with it, which is the object, to learn to live with it…” (pg. 67) 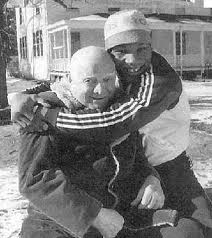 “Every fighter that ever lived had fear. A boy comes to me and tells me that he’s not afraid, if I believed him I’d say he’s a liar or there’s something wrong with him. I’d send him to a doctor to find out what the hell’s the matter with him, because this is not a normal reaction. The fighter that’s gone into the ring and hasn’t experienced fear is either a liar or a psychopath…” (pg. 67)
“When two men are fighting, what you’re watching is more a contest of wills than of skills, with the stronger will usually overcoming skill. The skill will prevail only when it is so superior to the other man’s skill that the will is not tested… As times as you see a fellow get tired in the course of a fight, note that he gets tired when pressure builds up, after he gets hurt or he’s been in some kind of doubtful situation, not being able to control the situation. That’s when he starts getting tired. That’s why when two good fighters get to fight, they’re head to head, so to speak, they won’t give an inch and they’re using all their skills and ability, until maybe about the seventh or eight or ninth round, one fighter starts to visibly weaken. It only means he’s reached a point where he no longer can stand the pressure. He’s now become dominated, because when two people fight it’s very much like two armies. They seek to impose their will on one another.” (pg. 76) 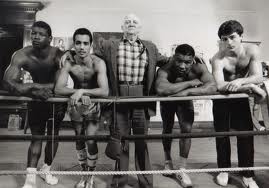 “I tell my kids, what is the difference between a hero and a coward? What is the difference between being yellow and being brave? No difference. Only what you do. They both feel the same. They both fear dying and getting hurt. The man who is yellow refuses to face up to what he’s got to face. The hero is more disciplined and he fights those feelings off and he does what he has to do. But they both feel the same, the hero and the coward. People who watch you judge you on what you do, not how you feel.” (pg. 97)

All quotes are from the book “Tyson: The No-Holds-Barred Biography of the World Heavyweight Champion,” by Peter Heller, Robson Books, London (1989).

Should You Practice Boxing with a Coach?
February 18, 2020

How Safe Is Boxing? Everything You Need to Know
January 16, 2020