Boxing in Art and Literature

Today’s selection comes from The Iliad, by Homer. 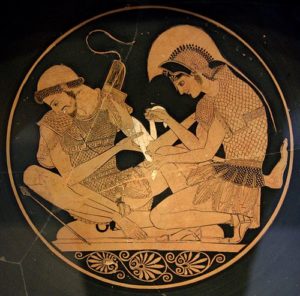 The Iliad is set during the Trojan War, the ten-year siege of the city of Troy by a coalition of Greek states. During the Trojan War, Achilles refuses to fight after a quarrel with King Agamemnon, leader of the Greek forces. Patroclus, a close companion of Achilles, then dons Achilles’ armor and leads the Myrmidons into battle. The Greeks, thinking him to be Achilles, are roused into a frenzy as they begin to beat the Trojans back. However, the ruse is discovered as Patroclus is soon killed by the Trojan prince Hector. The death of Patroclus is a key event in the Iliad, as it serves as the catalyst of Achilles’ legendary rage.

In Book XXIII, “The Funeral of Patroclus, and the Funeral Games”, the ghost of Patroclus, who died in battle, comes to Achilles in a dream, urging him to carry out his burial rites and to arrange for their bones to be entombed together. The Greeks hold a day of funeral games – including a boxing match – and Achilles gives out the prizes.

Thereon the son of Peleus, when he had listened to all the thanks of Nestor, went about among the concourse of the Achaeans, and presently offered prizes for skill in the painful art of boxing. He brought out a strong mule, and made it fast in the middle of the crowd—a she-mule never yet broken, but six years old—when it is hardest of all to break them: this was for the victor, and for the vanquished he offered a double cup. Then he stood up and said among the Argives, “Son of Atreus, and all other Achaeans, I invite our two champion boxers to lay about them lustily and compete for these prizes. He to whom Apollo vouchsafes the greater endurance, and whom the Achaeans acknowledge as victor, shall take the mule back with him to his own tent, while he that is vanquished shall have the double cup.”

As he spoke there stood up a champion both brave and of great stature, a skilful boxer, Epeus, son of Panopeus. He laid his hand on the mule and said, “Let the man who is to have the cup come hither, for none but myself will take the mule. I am the best boxer of all here present, and none can beat me. Is it not enough that I should fall short of you in actual fighting? Still, no man can be good at everything. I tell you plainly, and it shall come true; if any man will box with me I will bruise his body and break his bones; therefore let his friends stay here in a body and be at hand to take him away when I have done with him.”

They all held their peace, and no man rose save Euryalus son of Mecisteus, who was son of Talaus. Mecisteus went once to Thebes after the fall of Oedipus, to attend his funeral, and he beat all the people of Cadmus. The son of Tydeus was Euryalus’s second, cheering him on and hoping heartily that he would win. First he put a waistband round him and then he gave him some well-cut thongs of ox-hide; the two men being now girt went into the middle of the ring, and immediately fell to; heavily indeed did they punish one another and lay about them with their brawny fists. One could hear the horrid crashing of their jaws, and they sweated from every pore of their skin. Presently Epeus came on and gave Euryalus a blow on the jaw as he was looking round; Euryalus could not keep his legs; they gave way under him in a moment and he sprang up with a bound, as a fish leaps into the air near some shore that is all bestrewn with sea-wrack, when Boreas furs the top of the waves, and then falls back into deep water. But noble Epeus caught hold of him and raised him up; his comrades also came round him and led him from the ring, unsteady in his gait, his head hanging on one side, and spitting great clots of gore. They set him down in a swoon and then went to fetch the double cup.

How to Harness Willpower and Create Good Habits
October 30, 2016